Sandeep Sharma, second from left in the pic above, is a Type 2 diabetic, and was diagnosed in 2010 with a random blood sugar of 400 mg/dl.

This came in as a rude shock to him. But, that is not all. His journey from 2010 to 2017 was equally nightmarish. His numbers kept increasing and so also the drugs. Finally, his HbA1C had reached 9.6%, and he was on Janumet and Glimepiride for Diabetes, besides drugs for high cholesterol. His weight had reached 92 kg.

It was in July 2017 that he rang the alarm bells, when his doctor advised him to go on Insulin. This is when he found dLife.in, and his journey to recover his health and reverse Diabetes started.

He posted his success story on August 25th 2018. Like every one of our success stories, it is unique, and his words are straight from the heart. Instead of quoting snippets from there, we would like you to go through the entire thread on the forum.

Here’s his success story thread on the forum:

DLife the Life Changer for me

The pic below shows the transformation he underwent, due to changing from High Carb Low Fat diet to Indian LCHF diet. 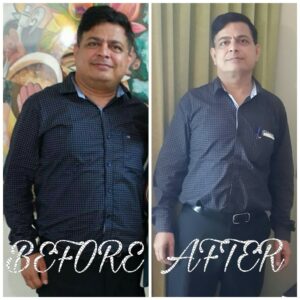 There are many such amazing success stories on the forum, and you can view them once you have registered. So click the “Join Now” button below, and be the next success story a few months down the line!