Insulin is a hormone produced by the pancreas (beta cells) for regulating blood sugar. It helps glucose enter the cells in muscles, fat and liver, where it is used for energy. Besides blood glucose regulation, insulin also plays an important role in fat regulation. Elevated insulin levels promote fat storage, whereas lower levels promote lipolysis.

Post a carb loaded meal, the pancreas releases insulin so as to keep blood sugar in normal range, as elevated blood sugars can cause a variety of complications.

What Is Insulin Resistance

When the cells in the human body start resisting the action of insulin, the pancreas releases more of it to counter the resistance. This elevation of insulin often goes undetected, as no one tests for fasting and postprandial insulin levels. We have seen PP Insulin levels of 250+ μU/ml, which is because we — and not the doctor — asked for the test. Is 250+ μU/ml normal? Surely not.

Elevated insulin levels work fine for some time — a few years may be — before partial beta cell burnout happens. This results in blood sugar control becoming erratic, and levels climbing up. However, before this stage is reached, the body gives you many warning signs, which are normally ignored.

Even signs of hypertension are just covered with drugs. Hardly any doctor recommends insulin tests. But, before Type 2 diabetes is detected, these visible signs of manifestation of damage become quite evident, sometimes as long as 20 years before onset of Type 2 diabetes. That’s metabolic syndrome.

What Is Metabolic Syndrome

Ideally, if insulin tests were a part of a standard blood panel, even elevated insulin would have been a condition, taking the total to six conditions. What’s surprising is that despite the epidemic of obesity and diabetes, the mainstream establishment still hasn’t included insulin tests as part of the standard. It’s really baffling! The famous insulin assay from Dr Joseph Kraft below is self-explanatory: 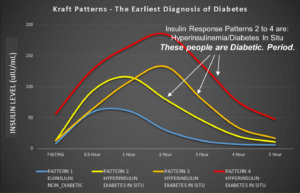 While managing Type 2 diabetes reversal, we on dLife.in invariably look for fasting and sometimes postprandial insulin levels. Insulin is a necessary evil, and maintaining higher insulin levels to control blood sugar is counter-productive.

If we leave the genetics part out, we find that mainstream experts blame “inactivity” as one of the major causes of insulin resistance. Our take is slightly different. While inactivity may be a problem, it’s the wrong diet that pulls the trigger.

Eating carbs that one cannot burn results in excessive fat storage, which then acts as the stepping stone for central obesity. That itself ticks off one of the three needed conditions for metabolic syndrome. Invariably associated with central obesity is higher triglycerides. So two conditions are met.

Being active is good for health. But being active just to ensure non-insulin mediated glucose uptake, and burn off an overload of glucose (read carbs) in diet, makes absolutely no sense. Why not simply cut down on carbs? This is precisely the basis of what we call “Indian Low Carb High Fat Diet“, which focuses on limiting carb intake in a day to less than the liver’s glycogen holding capacity — limiting carbs to at the most 100g/day, or 20% max of calorie intake.

Medications can be the other cause of insulin resistance. For example:

While I do not dispute the advantages of an active lifestyle, one must also note that one cannot outrun a bad diet. For this reason, we are against the advocacy of the High Carb Low Fat diet. We live by following a sequential line of action on dLife.in:

Medications come in last, as they should not be the first line of action. Aim for fasting insulin of 3 to 6 μU/ml. Don’t go for what the lab range says. That’s a criminally wide range.

The type of carbs one takes doesn’t matter as the production of insulin is directly proportional to the amount consumed. The talks of the Glycemic Index (GI) are irrelevant. As Dr Bernstein mentioned in one of his videos – “There’s a lot of nonsense going around in nutrition circles with respect to GI”.