Diabetes runs in Vishnu‘s family. He knew that he is genetically predisposed, but did not think that he would not be the first in his generation to get the disease. He says on his success story thread:

Though I knew that I am genetically predisposed to T2D considering both my parents were diabetic, I didn’t think I would be the first one considering I had an elder brother and sister.

He had a host of numbers in disarray on being diagnosed as a Type 2 diabetic, and here they are:

His switch to LCHF diet in the Indian context came about as a result of other Indian diabetics on the dLife.in platform. His A1C dropped from 9.3% to 6.8% in a month. In addition to the dietary change, he also adopted Intermittent Fasting as part of changes in lifestyle. Though his A1C came down quickly, he was concerned about high inflammation markers and weight. However, the numbers improved gradually, and his results at the time of posting his success story were:

This is not the first case on dLife.in where getting the weight down on LCHF diet also improved inflammation markers. Vishnu also started using the dLife DataLog utility by logging his numbers for tracking anytime later, in place of maintaining a plethora of datasheets offline.

In addition, convinced with the efficacy of LCHF diet, he convinced others in his family and extended family to switch to LCHF. Here’s what he says:

More importantly I have been able to convince my parents and extended relatives to go LCHF.
My mother got convinced only after she saw the effect of food for herself when she put on the Continuous Glucose Monitoring patch. She has come off her insulin and other medications such as statins.
My father has reduced his insulin by 50% and was able to get his cataract surgery done.

So, this is 3 success stories bundled into one.

While Dr Fung’s videos helped to explain the root causes, it was the empirical and real-life experiences of the excellent folks in Dlife who had skin in the game, which truly gave the conviction to go LCHF and attempt to reverse. 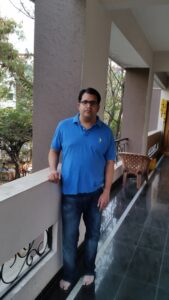 The after LCHF journey pic is posted as header image in this post.

Vishnu is one of 200+ diabetes reversal and weight loss success stories on dLife.in. To be the next, take the first step by clicking on the “Join Now” button below.