Roshan Chauhan is not a member at dLife.in, and not a diabetic, but a case of “riddled with obesity”. He is someone who Shashikant Iyengar & Anup Singh, of dLife.in, meet every time they spend a few hours over coconut milk coffee, and some LCHF preparation at La Pink Café, whenever Shashi is in Indore. Roshan is attached with La Pink Café.

The pic in the header image is Roshan Chauhan in Jan 2018, well over 105 Kg, and riddled with all sorts of problems – knee pain, panting, unable to move for some distance without a break, unable to climb to the first floor of the cafe in one go, and having high blood pressure, etc. This is when Shashi suggested Indian LCHF Diet to Roshan, and gave directions for following the diet, with a detailed diet chart, while Roshan diligently noted it all down.

In June 2018, when Anup and Shashi met again, Roshan is at 75 Kg. He devours eggs — 6 to 10 is child’s play for him — and he has  joined a gym after the first three months of seeing drastic improvements while on LCHF diet. Last when they both met him, he had said he was having “porridge” on instructions from the gym instructor. So, he was advised to get off all the wheat, oats and cornflakes nonsense, and stick to whatever diet chart Shashi had given him in Jan 2018.

He sure was headed towards being a fit case of “Bariatric Surgery”, and hence a damage to the pocket of anywhere between Rs 3 to 7 lacs, with additional risk of complications. He has avoided all that, thanks to LCHF Diet. This is just one case of Obesity fixed by Low Carb High Fat diet alone. On the forum, we have many cases of weight declining for diabetics, such as one from 113 kg to 85 kg over a period of one year. We now have a work-in-progress case of a 105 kg diabetic on 60 units of insulin. He is already off 60 units/day insulin right on the fourth day after joining dLife.in!

Last when Shashi & Anup met Roshan in June 2018, he was thrilled with his improvements, with none of the earlier problems nagging him. He even demonstrated how he can now easily bend down, how he can squat without any support, etc.

The food industry and their mouthpieces dress as dietitians and nutrition experts, pushing oats, cornflakes and Marie biscuits, and damaging health globally. This is one case, of many others on the forum, which proves that DIET is the KEY. We only focus on INDIAN LCHF Diet, something that even vegetarians can follow.

Here are some pics of Roshan:

After and Before in one: 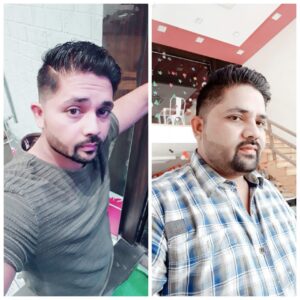 In the Gym and into final run of replacing body fat with muscles. 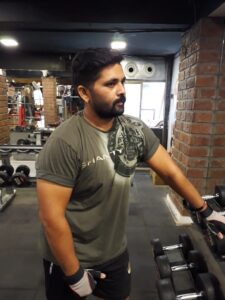 Get off the crap that’s being pushed as HEALTHY by the mainstream. That’s what we on Indian LCHF diet do, and get rid of a plethora of pills, while improving our medical reports.